Glaucoma Surgery Saves Woman From a Life in Darkness 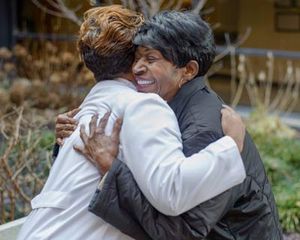 When Peggy Wellman noticed she was having trouble seeing, she went to Nashville General Hospital thinking she just needed a new pair of glasses. But ophthalmologist Chasidy Singleton, MD, diagnosed her with an eye disease that can’t be fixed with glasses. Wellman was slowly going blind from glaucoma. By the time Dr. Singleton examined her, she had already lost 90 percent of her peripheral vision in one eye, and 80 percent in the other.

Glaucoma is one of the leading causes of blindness, affecting about 2.2 million people in the United States. By 2020, that number is expected to balloon by 50 percent to 3.4 million.

Because there are no symptoms early on, about half of people with glaucoma don’t know they have it. Wellman was devastated. She’s 62 and she just retired. Overwhelmed by the diagnosis, Wellman dissolved into tears during her first visit to Dr. Singleton. “It just didn’t seem real to me,” she said.

Except in rare cases, a person who has glaucoma usually feels fine. They experience no pain. Their eyes aren’t red or irritated. That’s because the disease progresses slowly. It begins by gradually destroying peripheral vision. Because people are unaware of early peripheral vision loss, a patient can lose most of it before they even know they have glaucoma. Central vision, the vision used to read, drive or watch TV, is unaffected until the disease is advanced. Once vision is lost to glaucoma, it can’t be regained.

“I can’t give you your vision back, but I can help you hold on to the vision you have remaining.” – Chasidy Singleton, MD

When caught early, glaucoma can be treated with eyedrops or an in-office laser treatment. But in advanced cases, surgery may be required to slow the vision loss and prevent further damage. One of Wellman’s relatives has gone blind from the disease. She felt fine and was in denial about the severity of her condition, so she refused surgery.

Like her relative, Wellman was also hesitant to have surgery, but Dr. Singleton earned her trust by being honest and treating her with respect. “I told her, I can’t give you your vision back,” said Dr. Singleton. “But I can help you hold on to the vision you have remaining so you can function like everyone else.” 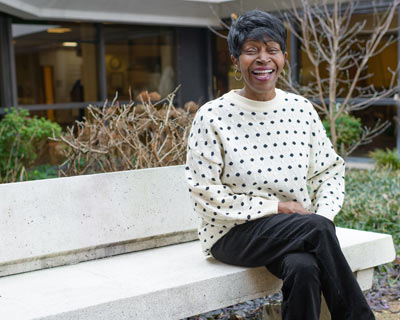 It’s not uncommon for Dr. Singleton to see patients like Peggy Wellman at Nashville General Hospital, a community hospital that serves the underserved and underinsured. Patients frequently come in unaware that they have a blinding disease. Then they get hit with the shock that the disease is already advanced and that they have needlessly lost much of their vision.

Dr. Singleton recently saw one of Wellman’s cousins, who was sent to her for a comprehensive eye exam because she has diabetes, which can also damage vision. Dr. Singleton had to give her the same news she gave Wellman. She has late-stage glaucoma and has suffered significant vision loss. She had no idea.

“It just didn’t seem real to me.” – Peggy Wellman

Dr. Singleton has treated several members of Wellman’s extended family and expects to see more. “I’m always bragging on her,” Wellman said. “I tell them, you are going to see someone who is going to help you.” 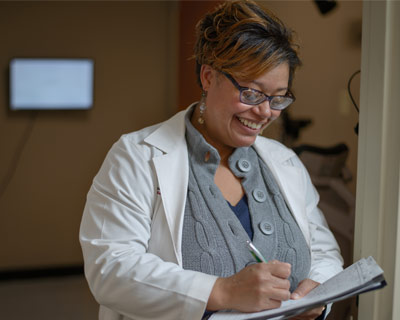 Genes aren’t the only reason some racial and ethnic minorities are more likely to go blind from glaucoma. Difficulties in access to healthcare also play a role. A study published this year showed that even when a patient has health insurance coverage through Medicare, many poor Americans and persons of color with glaucoma still receive less care than others. Many of them are going without the vital screening exams that detect glaucoma in its early stage, when vision can be preserved. It’s a complex problem with many causes, one of which is mistrust of the medical community and lack of awareness.

Dr. Singleton’s approach to the problem is to go to churches and health fairs, raising awareness about the importance of regular eye exams. “You have to be active in the community,” Dr. Singleton said. “That’s hard as a physician because we don’t have a lot of time. But we have to make time if we care about what’s happening to the people around us.”

Dr. Singleton doesn’t just take care of patients, she builds relationships with them. “I find it a privilege to work with these people and I let them know that,” Dr. Singleton said. “I thank them for allowing me to take care of them and putting their trust in me. They don’t have to do that, and that helps build a relationship with the patient.”

Now that Wellman knows more about glaucoma, she has helped educate her family about the disease. Her 35-year-old son is already getting regular exams to screen for glaucoma. He knows that even though he’s not experiencing pain, it doesn’t mean he doesn’t have the disease.

People age 65 or older and concerned about their risk for glaucoma may be eligible for a medical eye exam and up to one year of care at no out-of-pocket cost through EyeCare America, a public service program of the American Academy of Ophthalmology that matches volunteer ophthalmologists with eligible patients in need across the United States. Since 1985, EyeCare America has helped more than 1.8 million people. In addition, those who are at an increased risk for glaucoma may also qualify for a glaucoma exam through EyeCare America.

Additionally, Medicare provides an annual dilated eye exam for Medicare beneficiaries over 65 at high risk for glaucoma. Those eligible for this service are people with diabetes, family history of glaucoma, or African-Americans over 50. To learn more, call (800)-MEDICARE or 800-633-4227. Many university-based medical schools also offer discounted services for those who qualify. Inquire at your local university.